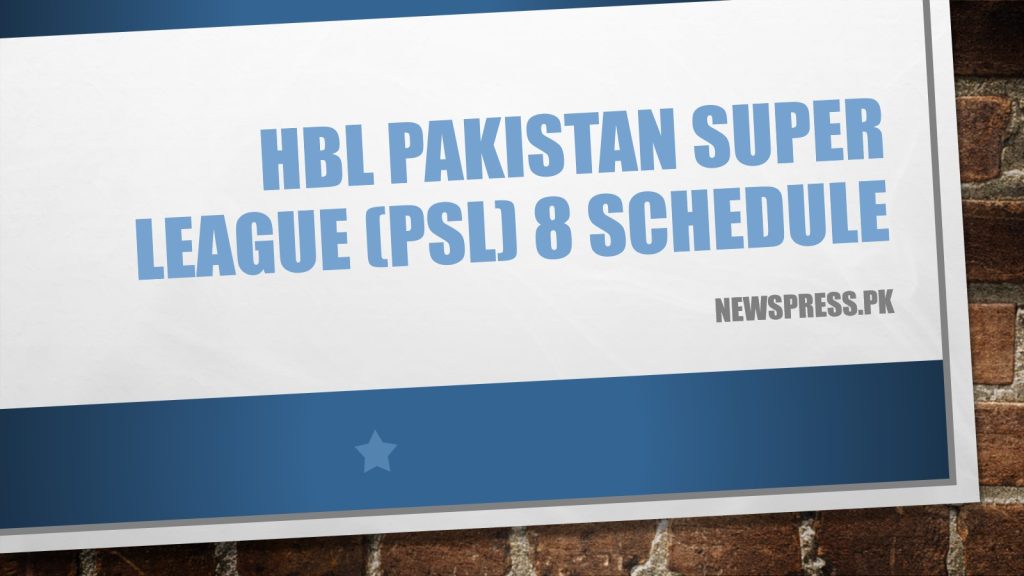 The Eighth season of the PSL Pakistan super league, sponsored by Habib Bank Limited HBL matches schedule, has been released. Six teams will be playing with 11 playing members in each team. We update here the HBL PSL 8 schedule 2023. Scroll down to view the PSL 2023 Squad and HBL Pakistan Super League PSL 8 Schedule and Date.

Pakistan Cricket Board PCB announced the HBL PSL 8th Schedule 2023 date and time. The opening ceremony of Pakistan super league season eight will be held in Multan Cricket stadium. Matches will be starts from 15th February till 31st March 2023. This February Cricket lovers are going to watch the exciting tournament matches on the home grounds. The opening Ceremony will take place in Multan International Cricket stadium on 15th February 2023 at 6 pm. This time PSL 8 Matches will be played in Multan, Karachi and Quetta Cricket stadiums.

T20 Cricket tournament PSL Named Pakistan super league is the first-ever international cricket league introduced by the Pakistan cricket Board PCB in 2015. Six teams are playing in this t20 cricket PSL. The Firsts seasons of the PSL Pakistan super league were played in DUBAI. After this our talented cricket players and with the efforts of other members of the PCB Cricket Board brought Pakistan PSL To its Home Grounds. Matches were played in Karachi and Lahore.  International Players are also playing in PSL 8. This time Some Matches including the Opening ceremony will be at Multan International Cricket Stadium. The following Teams are in Pakistan Super League PSL 2023.

In the Pakistan Super League PSL 2023 Squad all the six teams will have the 15 players with 11 Playing members. You can be seen here the Pakistan super league season 8 with the Squad names. PSL 8 Schedule 2023 Squad:

All teams will play 2 matches according to the PCB PSL 8 Schedule. After the main matches 4 teams will qualify for the semi finals as semi final 1 and 2. PSL 2023 Venue are mentioned below.